What to Know about Taking Car Crash Photos

Most drivers don’t know what to do if they are in a car crash. This is because most drivers think they will never be in a car crash. But the statistics showing the average driver’s likelihood of being in a motor vehicle accident suggest that everyone should know what steps to take immediately after a car wreck and what mistakes to avoid that could hurt your chances of filing a successful insurance claim. Knowing what to do after a car crash is critical because the more you drive, the more likely you are to be in an accident. 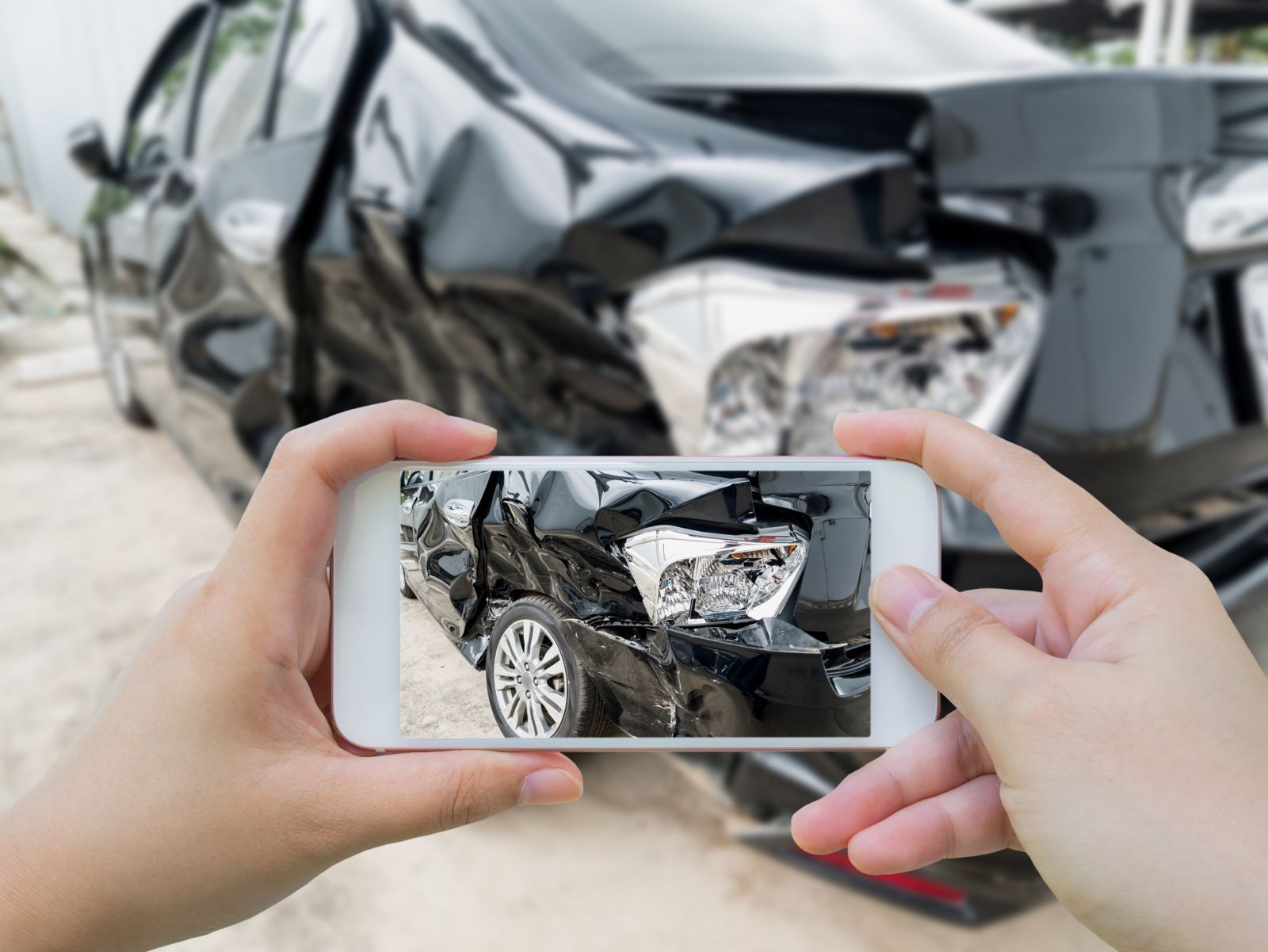 Statistically, for the average driver, there is a 1 in 366 chance of being involved in a car crash for every 1,000 miles of driving. According to Esurance, 77% of drivers have been in at least one car accident. If you obtain your driver’s license when you are 16 years old, you likely will have a car accident before you reach age 34. The average driver can expect to be in 3 to 4 accidents over the course of their lifetime and should expect to file an insurance claim once every 17.9 years as a result of a car accident.

To file a successful insurance claim after a car crash, you must show that another driver was at fault for negligently causing the accident and that you suffered property damage or injuries as a result of the accident. Although you likely will need an experienced car accident attorney to negotiate with an insurance company for a fair settlement, the best evidence to demonstrate fault and prove the nature and extent of your damages is by taking photos at the scene of the accident.

Taking relevant photos at the scene of an accident can help you paint a picture of what happened when the accident occurred and piece together evidence of who was at fault. It also can help you negotiate a fair settlement with the insurance company if the photos show the nature and extent of your property damage and physical injuries.

Taking photos at the scene is important, but before you start snapping pictures on your smartphone, there are two things that are even more important to do first:

If no one is seriously injured, determine if it is safe to move all the vehicles involved in the crash from the roadway. Other vehicles on the road will be approaching the scene. If you can safely move your vehicle off the road, do so. If it is too dangerous, leave your vehicle where it is until help arrives. Always stand away from the road after the accident. There may be glass, broken car parts, and other debris from the accident in the area that could still injure you if run over by continuing traffic.

Once you are sure that you are not seriously injured and have contacted the police for assistance, if it is safe to do so, use your cell phone to take photos at the scene while you wait for the police to arrive—even if you think you were partly at fault. Your cell phone will preserve evidence that may be relevant to your case but that you may not recall later. Your car crash photos at the scene will be the first, and perhaps most important, pieces of evidence that you collect in your post-accident journal to support your claim for compensation.

In addition to the police report and eyewitness testimony from any witnesses who observed the accident, the photos you take at the scene will be the best evidence of what circumstances may have caused the accident, the resulting property damage to your car, and any immediate injuries you may have suffered in the crash.

It is not unusual for victims of car accidents to be a little rattled or even traumatized after a car crash. Not only might you be injured, but you may be frightened, nervous, confused, and disoriented. You may not know or remember exactly what happened when the accident occurred. Later, it may be difficult to recall even the simplest facts about the accident. If you can’t remember what happened, it is very difficult to prove your claim for damages. But photos you  take at the scene will serve as evidence of the circumstances existing at the time of your accident, which may be helpful to your case.

Without photos, the insurance company likely will do everything it can to discredit your statements about the accident and the nature and extent of your injuries. But your attorney will use photos you take at the scene to make sure you receive fair compensation for your damages. The insurance company will be more likely to settle your case fairly if it is not just your word against the word of the other driver but, instead, you have photographic or video evidence that supports your claims. If the insurance company still does not want to negotiate fairly, your attorney will use your photos to support any future litigation that may be necessary.

What Photos Should I Take at the Accident Scene?

With your camera or cell phone, try to take pictures that may be relevant and helpful to your attorney in proving fault and damages.

What Car Crash Photos Are Relevant to Fault?

To prove that the other party was at fault, you must show that what the other party did was negligent, which means that they failed to adhere to the normal rules of the road that all drivers must adhere to so that everyone on the road is safe. There are certain things you can take pictures of that may be relevant to proving fault, such as:

Even if you think things like the weather or road conditions are not relevant to who was at fault for the accident, take pictures of the entire scene of the accident. Your attorney will be able to decide what is relevant to proving fault and what isn’t. Also, don’t be shy about taking as many pictures as you can. It is much better to have an irrelevant picture that you don’t need than it is to need a relevant picture that you don’t have.

What Car Crash Photos are Relevant to Proving Damages?

All of these damages depreciate the value of your vehicle and will be an expense to fix. If the other driver was at fault in causing these damages, you may be compensated for all of your expenses to repair or replace all the damage. The best way to prove to the insurance company the full extent of all your damages is to have clear, detailed photos of each part or area of the car that was damaged. The insurance company will have a difficult time arguing that your front bumper could have been repaired instead of replaced if you can present a photo of your bumper clearly showing the full extent of the damage.

What are Some Tips for Taking Car Crash Photos?

Here are some tips to consider for taking car crash photos that will make the task easier and more effective for supporting your personal injury claim.

What If I Can't Take Photos at the Accident Scene?

If you are injured in the accident or feel dizzy, shaky, nauseous, disoriented, or simply frightened immediately after the crash, do not risk your health or put yourself or others in danger by trying to take photos. Instead, you might ask a passenger or friend, who is not injured, compromised, or traumatized, to use their cell phone to take some pictures of the scene and your vehicle.

According to Statista, there are currently 7.26 billion people who use cell phones. That is 91.54% of all people on the planet!  If you don’t have your phone or cannot take photos yourself because of your condition after the accident, the odds are that a witness who is present or anyone who gathers at the scene after the accident will be carrying a cell phone that can take pictures. Simply ask someone at the scene to take photos of the cars and the conditions at the scene. If someone is willing, they can easily forward you the pictures that they take for you to use in your case.

If there really is no way for you or someone else to take photos at the scene, return to the scene later when you are able, when it is safe, to take the pictures you should have taken at the scene of the accident. The vehicles may be gone and the weather may be different now, but you can still take photos of the area, intersection, traffic signals, and even road conditions. These can still be useful to you later if the photos represent the area and conditions as they were at the time of the accident.

The Car Accident Attorneys at Foster Wallace, LLC Can Help You After a Car Crash

It is important and helpful to take photos immediately after a car crash. Photos paint a clear picture of the conditions that existed at the time of the accident and can present details that you didn’t notice or don’t remember. Car crash photos also help you to convey to an insurance adjuster the true nature and extent of your injuries and property damage. Armed with this photographic evidence, you can:

If you have been involved in a car crash and it is safe to do so, take as many pictures as you can immediately after the accident. Then call the experienced Kansas City car accident attorneys at Foster Wallace, LLC, for a free consultation. We will review each of your photos very carefully and determine which pictures will be relevant to demonstrating fault and proving damages and injuries in any personal injury claim you may have. We will make sure your car crash photos are used properly and effectively to negotiate a fair settlement and help you obtain the maximum compensate that you are entitled to. Call your Missouri and Kansas Car Wreck Lawyers at Foster Wallace, LLC, today at 816-249-2101.